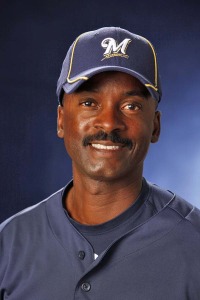 This is the second stint in the Brewers organization for the 52-year-old Coles.  He previously served as minor league hitting coordinator from 2010-11 and as manager at Double-A Huntsville from 2012-13.  He spent the 2014 season as assistant hitting coach for the Detroit Tigers, his first career coaching position at the Major League level.  The Tigers offense led the Major Leagues in batting average (.277), hits (1,557), RBI (731) and doubles (325) and ranked second (led the American League) in on-base percentage (.331), slugging percentage (.426) and OPS (.757).

Coles began his coaching career in 2000 as minor league hitting coordinator with the Seattle Mariners.  He played 14 Major League seasons and batted .245 with 75 HR and 368 RBI in 957 games.  He had stints as a player with Seattle, Detroit, Pittsburgh, San Francisco, Cincinnati, Toronto, St. Louis and Colorado.  He was a member of the 1993 World Series champion Blue Jays.

“Darnell has an impressive Major League background as a player and coach,” said Brewers GM Doug Melvin.  “With his knowledge of hitting and strength as an instructor, he has the ability to connect with our players, with whom he is quite familiar.”