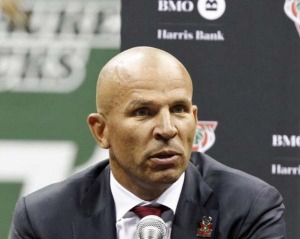 Ready or not, here they come.  The Milwaukee Bucks, after winning just 15-games a year ago, look to put that nightmare in the rearview mirror as they tip-off the 2014-15 season in Charlotte against the Hornets tonight.

Second-overall pick Jabari Parker gets his NBA career underway and is expected to start for the Bucks at power forward.  His goal isn’t to win the Rookie of the Year award, even though he’s considered a preseason favorite for that honor.  Parker instead has a loftier goal, to make the playoffs.

Jason Kidd takes over on the bench for the Bucks, making his debut against the Bobcats.  And he’ll have Bucks big man Larry Sanders to start the season.

Sanders has had problems on and off the court the past two season, including injury issues.  But he’s ready to go tonight and said the Bucks are ready as well.

Jason Kidd is looking first and foremost for his team to compete to be in games with a chance to win them.

When the New Orleans Hornets went with a new nickname (Pelicans), Charlotte reclaimed the Hornets, after a 12-year absence.