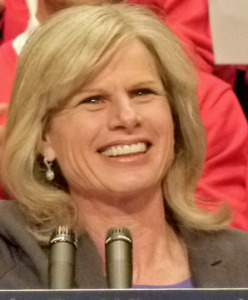 Central Wisconsin saw more activity from candidates for statewide political office Monday. Gubernatorial candidate Mary Burke stopped in Stevens Point, where she discussed her jobs plan with employees of Sentry Insurance before taking some questions from the media.

Burke made it clear she is not satisfied with recent reports showing the state spent millions of dollars on charter schools that failed.  “It’s outrageous that the state has spent over $100 million on schools that were not meeting their requirements, and their accountability, and so this is a program that Governor Walker wants to expand throughout the state without the type of accountability that is needed, and at the same time, it is draining money from our local schools and local school districts, and that is my concern.”

She adds,“There are some good schools in these programs. We should build on the good models, but expanding this program statewide without identifying how it’s going to be funded, or unless someone has another way of raising that money, or Governor Walker plans on raising taxes to pay for this program, the statewide expansion is only taking money from our public schools, so I do not believe it has any role in being expanded throughout the state.”

Burke said she felt she did well in Friday’s debate, and looks forward to meeting more people before this Friday’s second debate.