You are here: Home / Packers / Defense crumbles in loss to the Saints 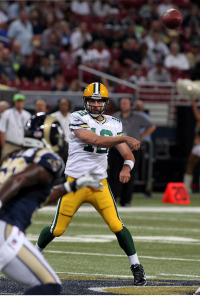 The New Orleans Saints showed Sunday night that they’re still playoff contenders, cruising to a 44-23 win over the Green Bay Packers at the Super Dome.

The Packers defense has been used to getting take/aways as a way to hold the opponents in check.  Last night, Drew Brees completed 27 of 32 for 311 yards and three touchdowns and running back Mark Ingram tore the Packers front seven to shreds with 172 yards on 24 carries and a touchdown.

In the first half, the Packers defense bent but wouldn’t break.  The Saints mustered one first half touchdown and three field goals.

But in the second half, rookie Brandin Cooks got behind the Packers secondary for a 50-yard touchdown and a 23-16 Saints lead.  Drew Brees then added a 22-yard touchdown pass to Jimmy Graham to give the Saints a 30-16 advantage and the rout was on.

The Packers played without starters Morgan Burnett and Sam Shields.  Burnett’s absence was very noticeable.  The Packers defense didn’t force the Saints to punt once in the game.  It’s the second time this season (Bears) that the opponent hasn’t had to punt against the Packers.

Offensively, the Packers got 418 passing yards and a touchdown from Aaron Rodgers.   But Rodgers also injured his hamstring in the loss.  He suffered the injury on a 7-yard scramble with 9:12 left in the first quarter.  He continued to play through the injury but tossed a pair of interceptions.

Rodgers hadn’t thrown an interception since the season opener and had thrown 19 touchdowns without one until the second half.  Both of his picks came on deflections.

The Saints improved their record in home games under Sean Payton to 20-0 dating back to the 2010 regular-season finale.  They improved to
3-4 on the season, trailing Carolina (3-4-1).  The Saints and Panthers will meet this Thursday night in Charlotte, N.C.

The Packers were out-rushed 193-89.  They lost the turnover battle 3 to 1 and the Saints added four sacks and five quarterback hits.

The Packers lost right guard T.J. Lang in the first series of the game after he suffered a sprained ankle.  Lang was replaced by second year man Lane Taylor.

The injury to Lang had an effect on the Packers offense and the most noticeable time came in the third quarter when Mike McCarthy decided to go for it on 4th and 1 at his own 40 yard line.  Taylor got pushed backwards and Eddie Lacy never made it through as the Packers turned the ball over on downs to the Saints on a short field.

The Packers came into the game as the second least-penalized team in the league.  The Saints were third.  But the Packers tied a season high with eight penalties and had a season-high 84 yards.  New Orleans was penalized just four times for 35 yards.

The Packers go into their bye week with a 5-3 record.  They trail the Detroit Lions (6-2) by one game in the NFC North standings.  Players are off today (Monday) through Sunday and won’t have to be back to work until next Monday.