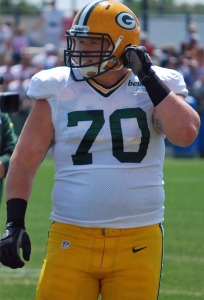 Green Bay Packers head coach Mike McCarthy said the medical report that he had received on Monday was promising with regards to the left hamstring injury suffered by Aaron Rodgers in Sunday’s game at New Orleans.

The injury happened in the third quarter of Sunday’s game and limited Rodgers, taking away his ability to scramble.

McCarthy told reporters on Monday that he didn’t get a chance to see Rodgers on Monday, but said the news on Rodgers is, “So far, so good I would say is how we’re looking at it.”

McCarthy said it was a good time for Rodgers and his entire team to have a bye.  It doesn’t appear Rodgers will be required to hang around Lambeau Field for any special treatment for the week.  McCarthy also said he anticipates all of his injured players will have a good chance to play in the teams next game, Nov. 9 against the Chicago Bears.

T.J. Lang left Sunday’s game on the first offensive series with a sprained ankle and didn’t return.  McCarthy said he thinks Lang has a good chance of playing in the Packers/Bears game in two weeks.

While the players are off until next Monday, the coaches will be doing a self-scout of the teams first eight games.  The coaches will get some time off this weekend.