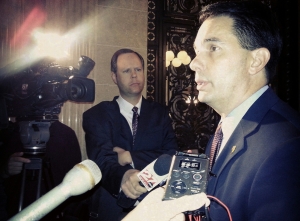 Governor Scott Walker says, if elected to a second term, he will specifically tell lawmakers not to pursue right-to-work legislation, nor will he expand the Act-10 collective bargaining restrictions to fire fighters and police.

Walker says such a debate would “bring back the whole firestorm again,” referring the massive protests over Act 10 at the Capitol in 2011. “It’s not even just about whether I think the policy is good or bad, it’s about the tenor and the tone of the legislature and what it means ultimately to the state as a whole.”

AUDIO: Walker says he won’t pursue right-to-work legislation, if elected to a second term, nor will he expand the Act-10 collective bargaining restrictions to fire fighters and police. Though, he doesn’t regret making the changes in 2011. :19

The governor says making any further changes to Act 10 “opens up a whole other can of worms.” He says, “And so, I’m saying it right here, I’m not gonna just quietly say it, I’m gonna say it to people who are listening in or watching, that’s my focal point, particularly when it comes to issues that would reinvigorate the kind of debate we had a few years ago.”

“It was tough,” Walker says, but stands by his signature legislation. His biggest regret is acting on it too quickly before adequately explaining it.

The governor spoke about several hot issues with the Milwaukee Journal Sentinel‘s editorial board on Tuesday.