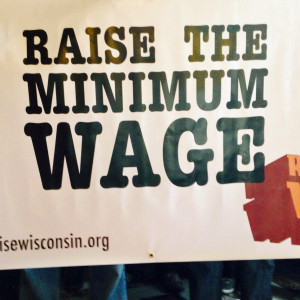 Advocates for a higher minimum wage want to force the governor to increase the rate; they hope to draw attention to the issue before the election.

Wisconsin Jobs Now is taking legal action, because its members say the current $7.25 an hour minimum wage is not a “living wage,” as required by law.

Jennifer Epps-Addison is director of the group. “Underpaid workers are suing Governor Walker to demand that he follow the law. Walker broke state law by denying valid complaints from underpaid workers without the due diligence of even a cursory investigation.”

The group is suing the governor as well as Reggie Newson, in his role as secretary of the Department of Workforce Development.

The lawsuit comes just a week before Election Day. Epps-Addison denies the filing is a political stunt. She says they have been focused on increasing the minimum wage for quite some time. “For the last year and a half workers have been demanding a raise in the minimum wage — both by going out on strike and by talking directly to elected officials.” She says, “Governor Walker has refused to hear those claims.”

Epps-Addison says the legal action is in response to the state’s rejection of more than 100 worker complaints regarding the current minimum wage, saying it does not comply with Wisconsin’s living wage law. The group is also responding to news that there was no adequate investigation on whether $7.25 is high enough to make ends meet. Walker’s Democratic opponent Mary Burke favors a wage of $10.10 an hour.

The lawsuit was filed on Monday. According to a new report from the MacIver Institute, more than 91,000 Wisconsinites would lose their job under a $15 an hour minimum wage. The group’s president Brett Healy says, “An increase in the minimum wage to $15 an hour would be devastating for Wisconsin families and young people looking to establish a positive work history because many would lose their jobs.”