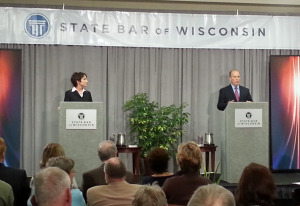 The two candidates for Wisconsin attorney general focused on their experience as county prosecutors, as they met Wednesday night in their third and final debate of the campaign. Appearing at the State Bar of Wisconsin offices in Madison, Republican Brad Schimel and Democrat Susan Happ said they want to make public safety a priority, if elected.

Schimel said his work as the district attorney in Waukesha County has prepared him for the issues facing the Department of Justice. Citing a history of establishing task forces, running training sessions for prosecutors statewide, and operating a large law enforcement operation in his role as D.A., Schimel said “I’m ready to go statewide, and I’ve got a footprint that demonstrates I can do it already.”

Happ, the D.A. in Jefferson County, pointed to her own experience as a prosecutor and running her own law office as more than preparing her to take on the role of heading the Department of Justice.

Schimel and Happ are running to replace outgoing Attorney General J.B. Van Hollen, who decided not to seek a third term in office. Both candidates have been the targets of attack, from their opponent and outside groups. Happ was critical of Schimel during Wednesday’s debate for mischaracterizing her record. “I think the tone and tenor of the campaign has gotten awry,” Happ said.

One area where both candidates do find common ground is on the challenge the next attorney general will face in continuing to battle a growing heroin epidemic in the state. Schimel pointed to his experience fighting the problem through drug courts and task forces, remarking that “I have met with dozens of parents who’ve buried their children…and I’m tired of it. And because of that, I got out in front of this years ago.”

Happ said many smaller counties need more resources to battle the problem, pointing to her own efforts in Jefferson County. “When we don’t have the experience or the staff necessarily to provide services to law enforcement or to bring information to our citizens, sometimes we can struggle.”

Schimel and Happ face each other in next Tuesday’s election. The most recent Marquette University Law School poll shows Schimel leading 43-39 percent among likely voters, although 14 percent of voters are still undecided in the race.