You are here: Home / Badgers / Hockey Badgers swept by NMU 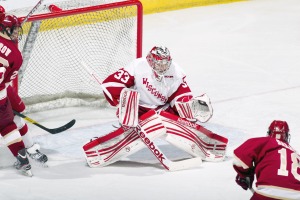 Wisconsin‘s power play drought continued on Saturday night in a 4-1 loss to Northern Michigan at the Resch Center in Green Bay.

The Badgers went 0 for 7 with a man advantage and finished 0 for 12 on the power play for the weekend.

Northern Michigan earned the 2-game sweep as the young Badgers are off to a 0-4 start on the season.

The Badgers lone goal on the weekend came when Brad Navin found the back of the net with 1:33 left to play, spoiling NMU’s second straight shutout.

Joel Rumpel took the loss in goal, stopping 14 shots in his third straight start in goal for Wisconsin.

The Badgers will get plenty of time off now.  They won’t play for nearly three weeks now when they open the home portion of their schedule against North Dakota on Friday, November 7 at the Kohl Center.