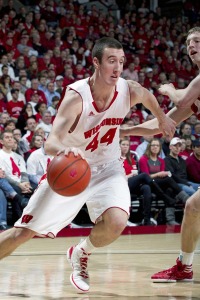 Wisconsin senior forward Frank Kaminsky was named Big Ten preseason Player of the Year on Thursday and the Badgers were picked to win the Big Ten title, ahead of Michigan State and Ohio State.

The selections were made by a panel of media members who cover the Big Ten.

Kaminsky and junior forward Sam Dekker were first-team picks.  This is the first time UW has had two players named to the preseason all-conference team.

The Big Ten Conference releases only the top three teams expected to challenge for the title.  It’s the first time Wisconsin was tabbed preseason number-1 under Bo Ryan.

AUDIO: Bo Ryan said being picked to win the Big Ten is no big deal :13