You are here: Home / Badgers / Kaminsky not comfortable being big man on campus 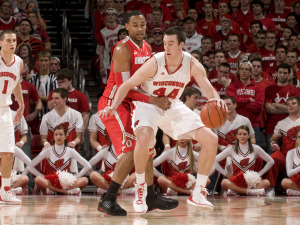 The University of Wisconsin men’s basketball team is a unanimous pick to win the Big Ten Conference this season.  To add to the target that will be on the back of the Badgers this season is the fact that big man Frank Kaminsky is the unanimous choice as the Preseason Player of the Year.  Kaminsky is joined on the All Big-Ten first team by forward Sam Dekker.

After a breakout season last year, leading the Badgers to the Final Four, Kaminsky is now the star attraction in Madison.  But the 7-footer isn’t necessarily comfortable with it.

AUDIO: Frank Kaminsky on going from reletively unknown to preseason Player of the Year :17

At the Big Ten Media Day in Chicago, Kaminsky said, “I’m more impressed with the fact that as a team, we’re picked to win the Big Ten.  That’s more impressive too because you can get a plaque saying you won all-Big Ten, but I want a Big Ten Championship ring.”

Kaminsky has put the Final Four semifinal loss to Kentucky behind him, but he’s used it as motivation to get better.  After scoring 28 points and pulling down 11 rebounds to get past Arizona in the Elite Eight, Kaminsky scored just eight points against Kentucky.

Kaminsky said he wasn’t ready for what Kentucky threw at him.  He said he plans to be ready next time.

The Badgers open their season with a Nov. 5 exhibition game against UW-Parkside and Nov. 14 against Northern Kentucky at the Kohl Center.