You are here: Home / Sports / Marquette is 3rd heading to Erin Hills final round 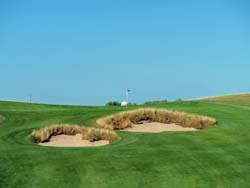 The Golden Eagles had cut UCLA’s lead to just two-strokes early in yesterday’s second round before the Bruins mounted a rally to widen the gap.  UCLA is three shots up on second place SMU and 9-shots up on Marquette.

The University of Wisconsin is in sixth place.

The final round gets underway at 8:30 this morning (Tuesday).

Erin Hills is the site of the upcoming 2017 US Open.