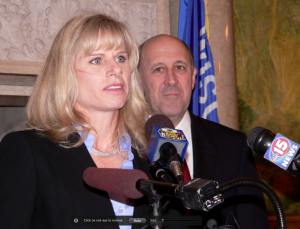 Democratic gubernatorial candidate Mary Burke appears to be distancing herself from former Governor Jim Doyle, with whom she worked for nearly three years.

During a meeting with the Milwaukee Journal Sentinel editorial board Wednesday, Burke said she hasn’t sought advice from the man who appointed her as his Commerce Department secretary in 2005. “I talk to Governor Doyle, uh, infrequently.”

Burke said she hardly communicates with her former boss at all. “Not even once a month,” saying it’s been only a “few times” since she got into the race. Doyle was first elected in 2002 and served two terms as Wisconsin’s chief executive. Burke said, “I have a lot of good people on my team and I get a lot of good advice.”

Governor Scott Walker, who doesn’t talk about Burke by name, frequently compares his opponent’s policies to those of his predecessor — even mentioning him four times in last Friday’s debate. Walker says electing Burke would be essentially a third term for Doyle.

For her part, Burke said there were things on which she and Doyle did not see “eye to eye,” including raids to the transportation fund and large increases to college tuition.

Burke and Walker are tied in the latest Marquette University Law School poll that was released on Wednesday.