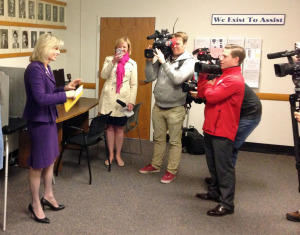 Mary Burke cast her vote Tuesday in Wisconsin’s closely contested governor’s race. The Democrat cast her early absentee ballot at the Madison clerk’s office – and there were plenty of media on hand as she did. Burke said she wants to make voters aware of the option. “It is to increase awareness of early voting, that there is that opportunity,” she said. The early voting got underway Monday at clerks offices across the state.

In a race that’s all about turnout, Burke said she’s not overly focused on specific numbers of early votes versus those cast on Election Day November 4th. “I look at the turnout overall by November 4th, and certainly need to have good turnout.” she said.

The race is generating support from big names: First Lady Michelle Obama has campaigned twice for Burke, former President Bill Clinton will be in Milwaukee on Friday, and a visit from President Obama is possible in the week prior to the election. “People wouldn’t be here unless they thought I had great chance of winning,” Burke said.

Burke expects turnout to be greater than in the 2010 race for governor, but probably not as large as in the 2012 recall. Republican Governor Scott Walker – who plans to vote on Election Day – has had only one campaign visit from a big name supporter so far – New Jersey Governor Chris Christie.