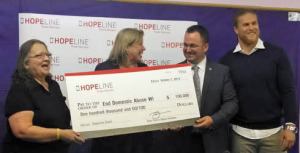 A member of the Green Bay Packers hopes to encourage teens to talk to each other, if they’re in an abusive relationship.

The group’s executive director, Patti Seger, says having an NFL star support them will get teens to pay attention. Seger says her group is working with some teens across the state. She says they’ll come up with plans for the new program, next year.

Matthews says Packers fans can help domestic abuse victims, in another way. He says on November 9th, for the Chicago Bears game, they’ll be collecting used cell phones. He says they’ll be refurbished, and given to abuse survivors.