You are here: Home / News / Michelle Obama stumps in Madison for Mary Burke 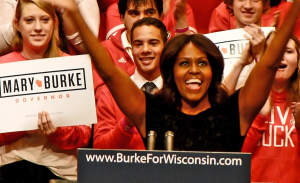 The theme at the Madison event is all about women, youth, and minorities. “We can do this. That’s the thing I know,” exclaims first lady Michelle Obama, stumping for Wisconsin Democratic gubernatorial candidate Mary Burke. “We can do this. If women and minories and young people show up, Mary wins. She wins.”

Obama tells the crowd of mostly college students, “Too many young people feel like elections just don’t matter” so, they say, “why bother?” Obama stresses to the young crowd each vote is “critical,” because, she says, “Mary’s race is going to be tight.” She tells the youngsters, “It’s about your hopes and your dreams.”

AUDIO: Mrs. Obama tries to get young people fired up to vote. :56

Burke, the former Trek bicycle executive, touts her resume to the 1,250 supporters at the Overture Center not far from the UW campus. “The future of Wisconsin is at stake and the eyes of the country are on us.”

Democratic attorney general candidate Susan Happ says the Republicans are counting on low voter turnout, so, she tells the crowd to vote November 4th and prove the GOP wrong.

AUDIO: U.S. Representative Mark Pocan (D-Madison), riling up support for Burke and Happ, gives his explanation as to why Wisconsin is so “purple.” :31

This is Mrs. Obama’s first public appearance to Wisconsin’s capital city since the 2008 presidential election, though the first lady was in Milwaukee with Burke just eight days before.

“This was nothing but a ‘do-over’ for Mary Burke’s campaign after they botched the first White House visit by mistreating the disabled, manipulating the media, and featuring music from a domestic abuser — and this time, they unbelievably locked out journalists and even worked with Secret Service to require the race of reporters looking for credentials. Yet again, Burke’s campaign just doesn’t get it.”