You are here: Home / News / President Obama stumps for Mary Burke in Wisconsin 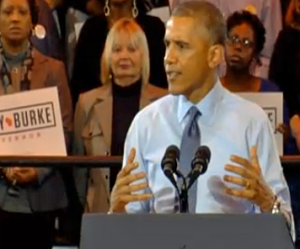 President Barack Obama stumps in Milwaukee for Democratic gubernatorial candidate Mary Burke in a very tight race. Both politicians repeatedly emphasize the importance of casting a ballot in this election.

The president slams Republican Governor Scott Walker on several hot button issues — jobs, minimum wage, health insurance, and education — while calling Burke an “honest person … who cares about people.” But, he says, there are also “policy reasons” why the former Trek bicycle executive needs your vote.

Obama points out Republicans aren’t bad people. They love their country, he explains, just like Democrats. “But,” he says, “they’ve got some bad ideas.” Obama jokes he’s got family members with bad ideas. “They’re still part of the family,” he says, “but you don’t put ’em in charge.”

The president’s appearance in Wisconsin is one of several campaign events in states with close races for governor.

Governor Walker says the many visits from the president and similar high-profile politicians show Burke is “the candidate of Washington.”

Burke and Walker are tied in the polls. Each campaign says turnout is the key to a win.  A final Marquette poll is scheduled to be released Wednesday, though both candidates have said the only poll that matters is at the voting booth. Election Day is Tuesday, November 4th.

After the Milwaukee rally Executive Director of the Republican Party of Wisconsin Joe Fadness released the following statement:

“Wisconsin can’t afford a governor who will walk lock-step with President Obama and his failed policies that have hurt our country and would take Wisconsin backward. As President Obama appears with Mary Burke, voters must remember that the president’s failed policies are on the ballot this November — policies that have raised taxes on the middle class and made it harder for small businesses to succeed.”