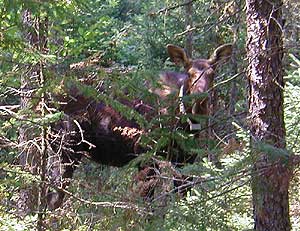 Residents of the Eau Claire County region have reported a number of rare moose sightings in the past week. The latest was Sunday in the town of Union, drawing a crowd of people with cameras along I-94 in Elk Mound.

State DNR biologist Jess Carstens said he’s certain the animal was the same one spotted by several others as early as last Tuesday in Dunn and Barron counties. Some witnesses have reported seeing the moose roaming with a female, but Carstens has not received any confirmed female sightings.

Moose have been known to visit far northern Wisconsin near the Upper Michigan border, but it’s rare that they get as far south as Eau Claire.

Anyone who sees a moose is urged to leave it alone, because they can be dangerous if agitated.