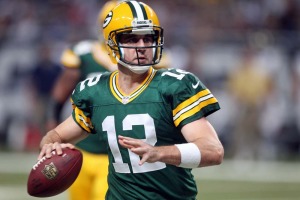 Green Bay Packers quarterback Aaron Rodgers may be one the best quarterback in the NFL, maybe the best, but he celebrated Sunday’s come-from-behind 27-24 win over the Miami Dolphins as if it were one of his first victories.

Rodgers led the Packers to a field goal and then a 4-yard touchdown pass to Andrew Quarless with three-seconds left to complete the comeback.

In his career, Rodgers has only 10 game-winning drives, defined as games where the Packers trailed and he led them to the go-ahead score in the fourth quarter, and they never gave up that lead.

The Packers had 2:04 left and no timeouts when they got the football for the last time.  They had to go 60-yards to score a touchdown and win.  Plenty of time for Rodgers right?

The Packers not only scored that touchdown, but they left just three-second on the clock.

Rodgers game-winning drive included a little of almost everything.  It had a fourth down conversion when Rodgers found Jordy Nelson.  But that play wouldn’t have even happened if it wasn’t for right guard T.J. Lang, who recovered an Aaron Rodgers fumble the play before.

The drive started with a 12-year run from running back James Starks.  Starks also caught a pass on third-down that he converted into a 1st down.

Miami coach Joe Philbin opened himself up to criticism when he called a pair of defensive timeouts to allow his tiring defense to catch their breath.  But it also allowed the Packers time to gather their thoughts.

Eventually, after a Jordy Nelson catch, the Packers looked like they would clock the ball to stop the clock.  Instead, Aaron Rodgers faked the spike and found rookie Davante Adams along the right sidelines.  He scampered to the four-yard line before being pushed out-of-bounds.  It left the Packers with six seconds and one, maybe two plays.

Tight end Andrew Quarless had been in Aaron Rodgers ear the entire game, telling Rodgers he was drawing linebacker coverage and getting open all afternoon.

The Packers had a different play call coming out of the huddle, but when Rodgers saw Quarless split out wide and have a single linebacker in coverage, he changed the call, made a back shoulder throw to Quarless and the rest is history.

It’s clear the 86-degree heat and 63% humidity, played a role in the Packers struggling down the stretch.

But after the Packers kicked a fourth field goal to get to within 4-points, the defense found away to come up with a key stop to get the ball back in the hands of their offense for the game winning drive.

The Packers are hoping for good news on the injury front.  They lost starting cornerbacks Sam Shields and Tramon Williams on back-to-back plays in the second half.  They also lost linebacker Jamari Lattimore for the rest of the game with a neck injury.  Shields suffered a Patella Tendon injury but there’s no word from the Packers on any of the injuries as of this time.