You are here: Home / Packers / Weather could force Packers to get their rush game on track 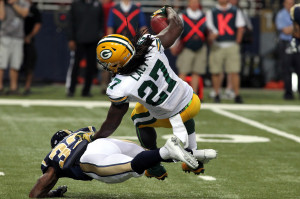 With a 100% chance of rain during tonight’s game against the Minnesota Vikings, the Green Bay Packers may be forced to get their running game going.

Playing against a Chicago Bears defense that was ranked 26th in run defense, Eddie Lacy struggled to get on track.  In four games, Lacy has just 161 total yards rushing, averaging just 3.0 yards per carry.

After surpassing a thousand yards last season, Lacy’s production has dropped off considerably in the first quarter of the season.

James Starks didn’t get a single carry last week and head coach Mike McCarthy this week admitted that was a mistake and vowed to not let it happen again.  McCarthy said he wants Lacy and Starks to combine for 25 to 30 carries a game.

If the rain hits like the weatherman predicts, the Packers may have to try to balance their attack out by increasing the number of carries.

The Vikings rookie quarterback earned a win in his first start last week over Atlanta and passed for over three-hundred yards in the process.  But Bridgewater sprained his ankle in the fourth quarter and is listed as questionable going into tonight’s game.

It looks like the Vikings won’t make the decision until just before kickoff and may lean towards third stringer Christian Ponder if they feel the field conditions could risk Bridgewater’s health.

Packers linebacker Clay Matthews couldn’t remember the names of the Vikings running backs.  If the Packers, who rank dead (32nd) in rush defense through four games, don’t do a better job against the run, Matthews will want to forget Matt Asiata and Jerick McKinnon.

The two Vikings running backs combined for more than 200 yards rushing in last weeks win over Atlanta.  Matthews said this week it boils down to taking care of “very simple assignment issues and technique.”

The problem for the Packers is the short week.  With very little practice time between Sunday’s win over the Bears and tonight’s game against the Vikings, it might be difficult to fully correct the issues that have hurt the Packers.

Green Bay’s number-3 receiver Jarrett Boykin has been ruled out of tonight’s game with a groin injury and Mike McCarthy said Wednesday that Boykin could miss next weeks game at Miami as well.  That means second-round pick Davante Adams will have a chance to make an impact in the Packers passing game.  Seventh round pick Jeff Janis could also get his first opportunity in the Packers passing offense as well.