You are here: Home / Legislature / Wisconsin Assembly Republicans looking to next session (AUDIO) 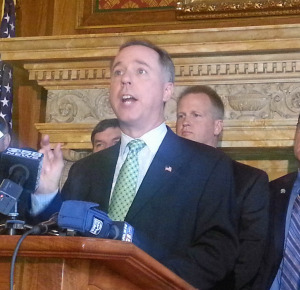 The election is still two weeks away, but Republicans in the state Assembly are already turning their attention to the next Legislative session.

Speaker Robin Vos (R-Rochester) and fellow GOP lawmakers outlined their ‘Forward Agenda‘ Tuesday at the Capitol. Vos said “the centerpiece of our agenda is really making sure that we focus on jobs and the economy. We want to create a better climate to grow jobs, we want to train workers for the high demand jobs that we know we are seeing all across Wisconsin, we want to help people find jobs faster so they can get back to work and support their families.”

The plan also calls for targeting public assistance fraud and reducing government regulations and red tape. Vos said “we’ll come back in January, we’re going to have an aggressive agenda ready to go on the floor, working together to try and move Wisconsin forward.”

In a statement, Assembly Democratic leader Peter Barca (D-Kenosha) accused Republicans are “doubling down on the same failed agenda that has left Wisconsin dead last in the Midwest in job growth and facing a staggering structural deficit.” Barca added that it “appears Republicans have no intention of prioritizing support for our public schools, ensuring affordable health care coverage or many other important issues that are the building blocks of a strong middle class.”