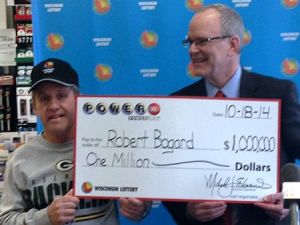 It’s early retirement for a Stanley man, after he won a million dollars in Saturday night’s Powerball drawing. Robert Bogard has played the lottery weekly for years, but has never won more than seven dollars. Bogard a few days without knowing he was a millionaire. He didn’t even check his numbers until Tuesday morning, as he was about to walk into work at Lagrander’s Hillside Dairy.

“There they were, Bingo! … I yelled ‘Hallelujah!'” The ticket matched all five regular numbers, but not the Powerball, which would have netted him $100 million. Bogard, who is 57 and has three grown children, decided his days of punching a time-clock were over. “I went in and got my rubber boots and told them I was quitting,” Bogard said at a press conference Thursday morning.

Bogard will get around $673,500 after taxes. The Stanley Travel Stop on Broadway Street, where he bought the ticket, gets a $20,000 commission.