You are here: Home / News / Rally in Madison in wake of Ferguson decision 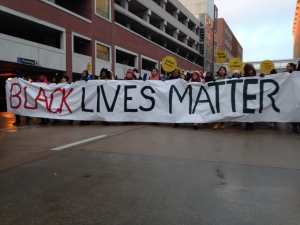 Hundreds took to the streets in downtown Madison Tuesday afternoon, in the wake of a grand jury decision not to indict Ferguson Missouri police officer Darren Wilson.

Up to 500 participated in the rally, hosted by the Young Gifted and Black Coalition, which released this statement:

Ferguson teaches us that there will be no change unless youth take to the streets. We are Young Gifted and Black, and we will take to the streets until we get liberation. We demand:
1) No new jail– Immediately abandon and denounce the proposal of a new jail. We instead propose human rights solutions that make jails obsolete. Some of those are implementing the Human rights of housing, food, education, and health care for Black people
2)Immediate release of people incarcerated due to crimes of poverty-We understand that poverty is a form of state violence, and that in Dane County 75% of Black children are living at or below the poverty levels, and that almost 5% of the population is Black and yet the jails are over 50% Black. We know these are related. Therefore we demand the immediate release of all people who are incarcerated for crimes of poverty.
3)Investments in initiatives led by young Black communities so that we can create change, and liberate ourselves.

The rally began outside the jail and eventually some 500 people took to the streets, halting traffic adjacent to the jail before moving on to the Capitol Square and returning to the jail. The rally was entirely peaceful.