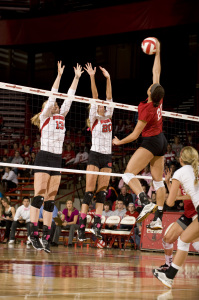 It’s been 13 years since the Wisconsin volleyball team won a Big Ten Conference title.  That streak could come to an end this week.

The Badgers need just one more match victory to claim a share of the Big Ten Championship.  It starts with a road game at last-place Rutgers tonight, for a chance to at least share the title with Penn State.  But a win over the Scarlet Knights and another over 16th-ranked Purdue on Friday will give Wisconsin the championship outright.

The Badgers enter action tonight riding a school-record 17 straight conference match win streak and leading the league with a 17-1 record.  Penn State is 16-2 with only two matches remaining and face a road match at Northwestern and a home match against No. 11 Nebraska.