You are here: Home / Badgers / Badgers end 8-game slide to start the season 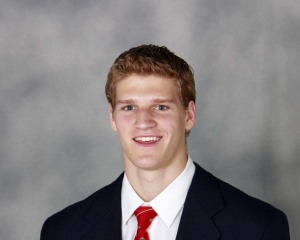 The Wisconsin men’s hockey team (0-8-1) earned its first point of the season Friday night, skating to a 1-1 overtime tie against Ferris State (7-6-0) at the Kohl Center.

Freshman Matt Ustaski gave the Badgers a lead minutes in the third period, scoring his second goal of the season on the power play.

The Badgers played with the lead for just over five minutes before Andrew Dorantes knotted the score on a wrist shot from the right circle.

Ferris State outshot the Badgers in the overtime 5-0, but Wisconsin’s defense held off the Bulldogs.

Following the five-minute overtime, the two teams took part in a practice shootout.  Morgan Zulinick of the Badgers put a backhanded shot past FSU goaltender CJ Motte for the shootout win.

Wisconsin goaltender Joel Rumpel made 34 saves to earn the tie.

The final game of the series faces off at 8pm tonight.