You are here: Home / Badgers / Badgers open season with win 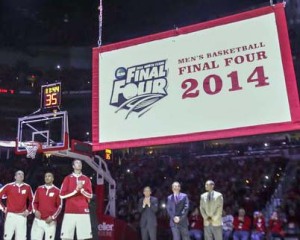 The University of Wisconsin raised the Final Four banner to the rafters and the players from the 2013-14 team received their Final Four rings in a pregame ceremony at the Kohl Center last night.

What followed was another strong defensive showing by Bo Ryan’s 3rd ranked Badgers.  They rolled to an easy 62-31 win over Northern Kentucky.

Frank Kaminsky scored 16 points and grabbed 11 rebounds, while teammate Sam Dekker added 15 points as the Badgers opened their season with a win.

The Badgers struggled from the 3-point line, where they made just 4 of 17 from the field.

The Badgers return to the court on Sunday at noon against Chattanooga.