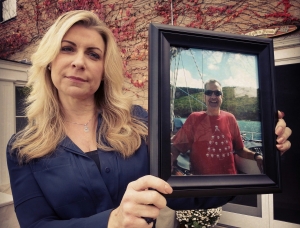 Wendy Kreps Peterson holds a photo of her husband Keith Kreps, who died August 19, 2014 with his loved ones by his bedside. (PHOTO: Jackie Johnson)

Terminally ill 29-year-old Brittany Maynard made national news when she moved to Oregon to make use of that state’s “Death with Dignity” law, rather than suffer through an aggressive brain cancer — stage 4 glioblastoma. The physician-assisted suicide advocate ended her life on Saturday.

Wendy Kreps Peterson lives in Madison. Her husband Keith Kreps passed away in August. Death was inevitable, but he was able to plan the time and place. Friends gathered at his bedside for a final farewell. “It didn’t have to be scary and dark and terrifying and morbid. In fact, it was beautiful.” The emotional Kreps Peterson adds, “It was lovely and peaceful and he deserved it.”

Only five states allow physicians to prescribe life-ending medications to terminally ill patients. Wisconsin is not among them. Kreps’ situation was different than Maynard’s. He was an active man who became bed-bound as a result of an undiagnosed disease. He needed assistance for every aspect of his life, including breathing.

AUDIO: Kreps Peterson says her husband wanted to have control, for various reasons. 2:00

Dr. Toby Campbell, chief of the Palliative Care program at UW School of Medicine, explains Kreps was on life support. “So he made a decision to turn off a machine — a breathing machine called a BiPAP machine — that was supporting his breathing and keeping him alive. Because he was dependent on that machine to stay alive, he had an option to turn it off.” (Obit)

AUDIO: Dr. Campbell says health professionals should inform patients about the best and worst case scenarios, as well as alternatives. :48 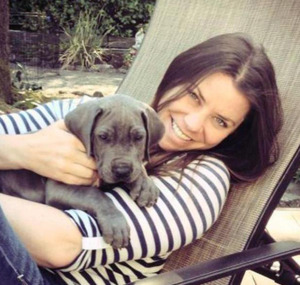 Maynard had made the difficult decision to end her life on November 1, 2014 in her home surrounded by friends and family. She moved to Oregon to seek a doctor’s aid in dying before being further robbed of her physical and mental abilities, and ultimately reduced to complete dependency. Maynard initially thought she could postpone her departure because she wasn’t ready. She said she still felt “good enough” and had “enough joy,” laughing and smiling with her family and friends enough that it didn’t “seem like the right time.”

Ultimately, Maynard took the lethal prescription drugs over the weekend. She was 29. TheBrittanyFund.org posted the obituary.

Campbell and Kreps Peterson both encourage everyone to consider their options and talk about their final wishes with their family — before it’s too late. Kreps Peterson says, unlike our ancestors, it’s odd that people nowadays don’t readily have conversations surrounding death. Dr. Campbell says the survivng loved ones are much healthier in the long run if they do communicate. He says they have a much lower risk for complicated grief disorder or post traumatic stress disorder (PTSD).

According to the most recent data from the Oregon Department of Human Services, 122 terminally ill patients were prescribed life-ending drugs in 2013 but only 71 used them to take their own lives.

Wisconsin Right to Life issued a statement on Monday, saying the group “extends our deepest condolences to the family of Brittany Maynard upon her death.   While we regret the circumstances of her death, we empathize with the severity of her illness.”