You are here: Home / News / Campaigns wait for results as polls close in Wisconsin 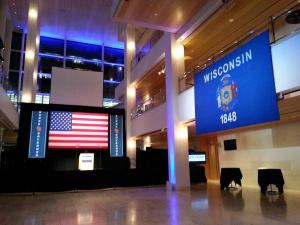 The room is set for Mary Burke’s supporters to gather in Madison (Photo: Jackie Johnson)

Polling places across Wisconsin have now closed and supporters of the two candidates in the race for governor gathering to watch the results come in.

Republican Governor Scott Walker’s supporters will be in West Allis, at the State Fair Park Exposition Center. Campaign spokeswoman Alleigh Marre says the governor started the day by casting his vote in Wauwatosa, then traveled to Green Bay and Wausau to meet with supporters. He’s now spending the evening with family, as he waits for election returns to come in.

Marre says they “feel good” about how tonight will go for the incumbent governor, although she also recognizes that it could be a tight race.

Democratic challenger Mary Burke’s campaign is set up at the Overture Center in downtown Madison. They feel good about tonight after criss-crossing the state.

Both candidates are expected to join their supporters later this evening, after the election has been called. You can follow WRN reporters Jackie Johnson and Andrew Beckett on Twitter for live updates from the campaign locations.