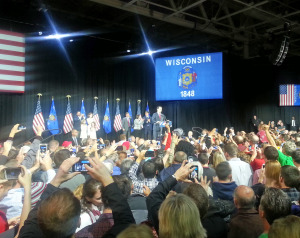 For the third time in four years, Governor Scott Walker wins an election, beating back a challenge from Democrat Mary Burke.

Speaking to supporters in West Allis Tuesday night after a marathon week and a half of campaigning, Walker started out by thanking God for his win. “I want to thank God for his abundance grace and mercy. Win or lose, it more than enough for each and every one of us.”

Walker delivered an often fiery speech to those who backed his campaign, as a crowd of over a thousand supporters cheered him on at the State Fair Park Exposition Center. The governor said his victory came despite special interest groups from Washington pumping “tens of millions of dollars” trying to convince the people of the state be against something. Walker said he focused on a positive message instead, with the belief that people wanted to be “for something, not against something.”

Walker said he took a concession call from his Democratic opponent before taking the stage, and thanked her for taking the time to meet with him briefly and take a picture as their campaigns crossed paths in Green Bay on Monday. “I know there are disagreements on policy issues, but I think that picture symbolizes tonight that she had a great love for her state…together we are Wisconsinites more than we are Republicans or Democrats.”