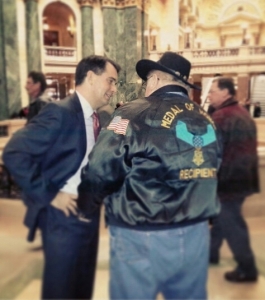 As Governor Scott Walker speaks at the Veterans Day ceremony in the Capitol rotunda, he talks about the freedom American citizens enjoy. “Endowed by our Creator,” he explains, “Defined by our constitution, and defended every day by the men and women (in the armed forces).”

The theme of this year’s ceremony is “Never Forgotten: Honoring Wisconsin’s Veterans.”

Walker points out that many men and women from the Wisconsin National Guard and well as the Army Reserve are currently deployed overseas, many in harm’s way. “Today, as we should every day, we say ‘thank you’ to those in uniform who are serving — even as we speak — and we say ‘thank you’ to all the veterans here and those that you represent across the state and across this country who have honorably served our country.”

AUDIO: Governor Walker addresses the crowd in the Capitol rotunda :31

The governor is joined by Wisconsin Department of Veterans Affairs Secretary John Scocos and former prisoner of war Colonel Don Heiliger. The Pledge of Allegiance is delivered by Medal of Honor recipient Gary Wetzel, and the national anthem is sung by state representative Warren Petryk (R-Eleva). (Video below)

Walker tells the crowd that although the words of the courageous military veterans might have been repeated over the years, there is an entirely new generation who hasn’t heard them. “And so it’s important at events like this, but also when we go back to our homes, we go back to our communities, we go back to our coworkers, we need to make sure that the best way to honor those men and women who served our country is making sure we honor their stories and memories for generations to come.”

Governor Walker presented a Certificate of Commendation to Colonel Don Heiliger, Vietnam POW; and also recognized Ray Sherman, WWII POW; and Dale King, Korea POW. Walker also presented the Veteran Woman of the Year award to Jennifer Sluga, and a Certificate of Appreciation to John and Mark Finnegan, founders of VetsRoll, which provides ground transportation to veterans to visit their war memorials and other sites in Washington, DC. at no charge to them.