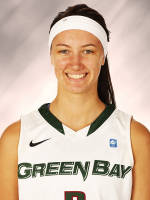 After knocking off 24th ranked Purdue in West Lafayette last Wednesday, the Green Bay Phoenix women’s basketball team cruised to a 84-52 win over Duquesne in Green Bay’s home opener on Saturday at the Kress Center.

The Phoenix led by as many as 33 points as Tesha Buck went 6-for-8 from three-point range.  The 5’11 sophomore finished with a game-high 24 points, matching her personal best.  She hit 9-of-12 overall from the field.

Senior Ellen Edison was perfect from the field, hitting all four of her shots, including 3-for-3 from distance.

The win for the Phoenix is their 15th straight in home openers.

The Phoenix, having played three of its first four games on the road, heads back out again to play in the Gulf Coast Showcase in Naples, Florida.  The teams first game will be Friday morning at 11am against Georgia Tech.  The field also includes defending national champion Connecticut, which is in the other half of the bracket.  Green Bay is hoping to face the Huskies in the tournament championship game on Sunday.