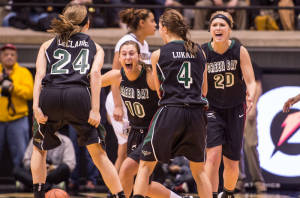 The Green Bay Phoenix women pulled off a road upset, knocking off 24th-ranked Purdue 81-78 in double overtime at Mackey Arena on Wednesday night.

Kaili Lukan scored 23 points, including two free throws with 9 seconds left in double overtime, to help the Phoenix to the victory in West Lafayette, Indiana.

It’s the first win for Green Bay over a ranked opponent since 2011, when it defeated No. 25 Georgia Tech.  The double overtime victory became just the second time ever the Phoenix has played back-to-back overtime games and is only the second double-overtime game in program history.

Green Bay returns home to host Duquesne in the home opener at the Kress Center.  Tip-off is set for 1 p.m.