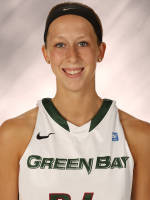 Five players scored in double figures to open the season and the Green Bay Phoenix women’s basketball team cruised to a 94-66 rout of Marquette on Saturday afternoon at the Al McGuire Center in Milwaukee.

Mehryn Kraker and Ellen Edison added 13 points each while freshman Jessica Lindstrom (Superior) scored 12 points in her debut and Sam Terry added 11 for the Phoenix.