You are here: Home / Packers / It’s time to get an extension done for Randall Cobb (Video) 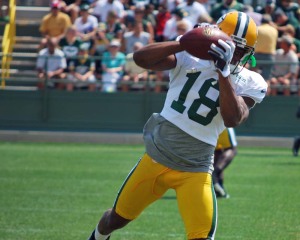 There’s absolutely no way the Packers would consider letting Randall Cobb leave in free agency.  He’s proven this season to be both available and highly dependable as a receiving threat, giving the Green Bay Packers one of the top receiving duo’s (Cobb & Jordy Nelson) in the NFL.

Together, the Cobb & Nelson duo has accounted for 114 receptions (3rd) for 1,777 yards (2nd) and 19 touchdowns (1st).  With Nelson drawing safety help on the outside, Cobb has roamed the middle of the field and has put up big numbers to date.  In fact, he has surpassed 100 yards receiving in four of the last seven games after a bit of a slow start for the entire passing game to start the season.

Cobb has 10 touchdowns on the season, second only to Denver tight end Julius Thomas (12).

The Packers wanted to see if Cobb could stay healthy after dealing with some injury issues during his first couple of NFL seasons.  Cobb has passed the test with flying colors so far this season.

Now it’s time to reward Cobb with a deal, that will certainly only get more expensive as time goes by.  If both sides are willing negotiators at this time, don’t be surprised if news of an extension happens soon.