You are here: Home / Packers / Lacy named NFC’s Offensive Player of the Week 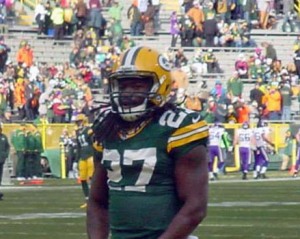 Green Bay Packers running back Eddie Lacy has been named the NFC’s Offensive Player of the Week.  Lacy had 138 yards from scrimmage, including 125 rushing yards, and scored a pair of touchdowns in the Packers 24-21 win at Minnesota.

Lacy opened the scoring with a 1-yard touchdown run, then gave Green Bay an 11-point lead with a 10-yard touchdown catch off a shovel pass with 8:34 remaining in the game.

After the Vikings cut the Packers’ lead to three with 3:28 left in the game, Lacy ran five consecutive times to gain 27 yards and two first downs to seal the victory by running out the clock.

Lacy, who rushed for 105 yards against Minnesota in week 5, joins Gale Sayers, Walter Payton, Billy Sims and Barry Sanders as the only players in NFL history to have two 100-yard rushing games against the Vikings in a single season.

This is Lacy’s second career Player of the Week Award.  He last received the honor in Week 15 last season.