You are here: Home / Packers / Lang still hoping to play for Packers on Sunday night 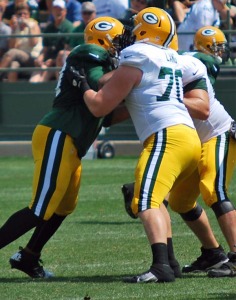 Lang and fellow starting guard Josh Sitton both missed the first two days of practice this week.  Lang is trying to recover from an ankle injury, while Sitton has a torn ligament in his big toe.  Both players suffered their injuries in the loss to the New Orleans Saints nearly two weeks ago.

Packers coach Mike McCarthy remained hopeful that both players would go through a workout today, a normal non-practice day for the team.

If they can’t play, then the Packers will go with backups Lane Taylor and JC Tretter.  At question for both players is what level of pain they can tolerate and still play, and if there’s a chance for further injury.

Lang said not practicing isn’t preferred, but he and Sitton have both played enough games in the NFL to be able to spend the entire week rehabbing and still play on Sunday.