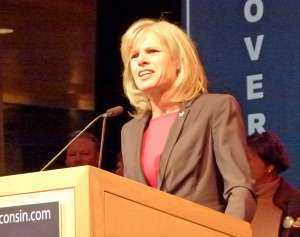 It was a grueling campaign, but Democrat Mary Burke just couldn’t stop Governor Scott Walker from winning his third gubernatorial election in just four years. In her concession speech, Burke quoted legendary Packers coach Vince Lombardi, saying “It’s not whether you get knocked down, it’s whether you get back up.”

Burke told the crowd, “Tonight Wisconsin re-elected Governor Scott Walker and for many of us it feels a bit like getting knocked down.”

The Madison School Board member and former Trek Bicycle executive congratulated the governor on a “hard fought victory.” She said they don’t agree on much, but she respects his work and sacrifice. Burke said, “Anyone who runs for higher office subjects themselves to endless scrutiny and criticism, works incredibly hard, and makes many personal sacrifices. For this, he has my respect.”

In her concession speech, Burke thanked everyone from her parents, to siblings, to nieces, and friends. She got a little emotional when she thanked her campaign staff.

Burke used $5 million of her own money on the race, but was forced to spend a lot of time defending herself against Republicans accusations of plagiarism and being fired from her family business.