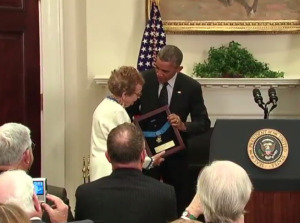 President Obama presents the Medal of Honor to a surviving relative of Alonzo Cushing.

A Wisconsin native killed while fighting in the Civil War has been awarded the nation’s highest military honor. Delafield-native Alonzo Cushing was a first lieutenant in the Union Army during the Battle of Gettysburg. He was killed by Confederate fire on July 3, 1863, while fighting back against heavy fire.

During a ceremony at the White House Thursday, President Barack Obama described Cushing’s last moments, after he was wounded on the battlefield. “Peering through field glasses, Alon ordered his men to continued firing at the advancing columns,” Obama said. “When he was hit the final time, as a poet later wrote, his gun spoke out for him once more before he fell to the ground.”

Cushing was just 22-years-old and his story remained untold for more than a century. The fight to award him the Medal of Honor started in the 1980s, after Margaret Zerwekh of Delafield began researching his story and lobbying Wisconsin’s Congressional delegation to honor his service. The President said her continued fight to earn recognition for Cushing shows that, no matter how long it takes, it’s never too late to do the right thing.

He also acknowledged that Cushing’s sacrifice was one of many at Gettysburg that helped turn the tide of the war, also noting that “I’m mindful that I might be standing here today as president, had it not been for the ultimate sacrifices of those courageous Americans.”