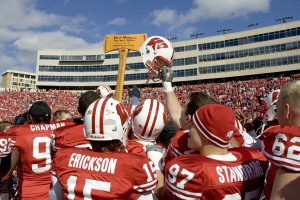 The Wisconsin Badgers currently have possession of Paul Bunyan’s Axe.  If the Minnesota Gophers can pull off the upset over the Badgers on Saturday, they won’t have the chance to sprint across the field to the Badger sideline to take back the Axe.

The two schools decided to change policy after an incident in Minneapolis last season almost led to a brawl.  Minnesota players circled the goal post near their student section in an attempt to block the Wisconsin players from using the axe to hack away at the goal post, which is part of the tradition.  That’s when things got ugly.

Now, the Axe will be on the field for the pregame coin toss, then taken inside the stadium.  It will be handed over to the winning team after the game and the players can then come back out onto the field after the game to celebrate with their fans.

Also at stake in Saturday’s game is the Big Ten Conference West Division title and a trip to the Big Ten Championship game.  It’s a winner-take-all scenario for both teams, who are tied atop the Big Ten’s West division entering play.