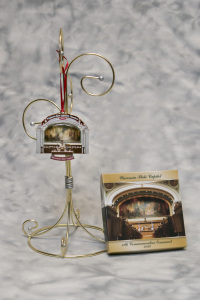 The program began in 2004. Each year, the souvenir focuses on a specific aspect of the state’s historic Capitol building. The 11th annual ornament features a replica of the Assembly chamber, its large mural, and Civil War mascot Old Abe above the speaker’s chair looking over the chamber.

Cate Zeuske is the ornament designer and former state Treasurer. “We wanted the largest mural — the first and largest mural — it’s 37 feet across. To me, it’s the favorite in the state Capitol,” she says. “It’s called, ‘the State of Wisconsin: its past, present, and future’ and I think it really does capture our rich history.”

AUDIO: Zeuske talks about the mural on the wall of the Assembly chamber, above the dais.   :30

Zeuske believes this limited edition decoration will be a keepsake. Only 1,900 ornaments were purchased. She notes, the goal is to promote and educate others about the beautiful and historic state Capitol building, rather than just raise money. That’s why the $16 price tag hasn’t increased since 2005.

It’s a labor of love for Zeuske, who volunteers her time. All proceeds go to the State Capitol Restoration Fund. “That’s a fund that is used to be able to purchase things perhaps outside of state government that may be retained for historic value in the Capitol or to give the public an opportunity to really view and experience the state capitol.”

Just recently, a glass perch was constructed up inside the Capitol dome to offer visitors a bird’s eye view of the rotunda using some of those funds. 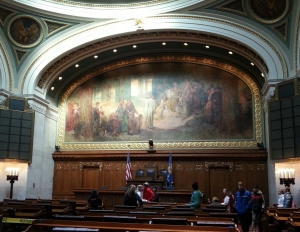 Zeuske hopes to continue the tradition for at least a few more years. She explains, the 100th anniversary of the completion of the Capitol building comes in 2017. So, she says, it seems like a good time to mark the milestone.

All the ornaments are made in America by the Chem Art Company of Rhode Island, the same company that also produces the annual White House ornament. The Capitol keepsake is set in a special gift box, in which buyers will find some historical information about the Wisconsin landmark. It sells for $16.