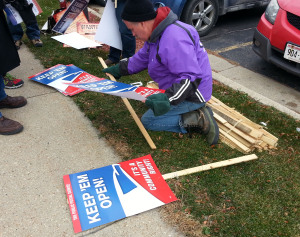 The U.S. Postal Service plans to close four of its sorting facilities in Wisconsin next year. Centers in Madison, La Crosse, Eau Claire, and Wausau will close, with the mail typically sorted in those spots sent to other facilities.

Postal employees are organizing in opposition to the decision, and staged a national day of action in cities across the country. At one of those events in Madison, several dozen workers picketed outside of the city’s main post office.

American Postal Workers Union of Wisconsin President Steve Lord says they are concerned the decision to close more than 80 locations nationwide is a targeted attempt to make the mail service less popular among the American people. He claims “the goal is to have the U.S. Postal Service fall out of favor with the American people, so they can further privatize us.”

The USPS says the closures are the result of the changing needs of the American public and how people are using the Postal Service. The agency says mail volumes have changed in recent years, with First Class letters seeing a sharp decline and more parcels moving through the system. As a result, the Postal Service is making operational changes to make sure resources are not sitting “idly by.”

Lord says customers will notice a change though. For example, mail sent from Madison to a Madison address will no longer be sorted in the city. It will be sent to Milwaukee instead, where it will be sorted and then sent back to Madison the next day. He says that means “if you mailed a letter across the street, it could take two days to get there.”

The Postal Service maintains that all First Class Mail deliveries within a city will be made within two days, and within three days in the contiguous United States.