You are here: Home / Packers / Report: Starr back home after hospital stay 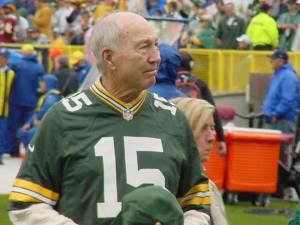 La Crosse television station WKBT-TV is reporting that Green Bay Packers legendary quarterback Bart Starr, who suffered two strokes and a heart attack earlier this year, is out of the hospital.

A former teammate of Starr’s, Jerry Kramer told the TV Station, “he’s still having a difficult time, but he’s home and we expect a bit of a bounce.”

Starr suffered a mild stroke on Sept. 2, then another stroke and heart attack on Sept. 7.

Starr helped lead the Packers to five NFL Championships and won the first two Super Bowls.  He led the NFL in passing three times and was named the NFL’s most valuable player in 1966.