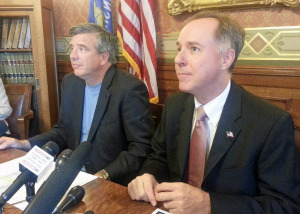 Assembly Republicans will return to the Capitol next session with their largest majority in over 50 years.

Republicans claimed at least 61 seats in the chamber in Tuesday’s election, while unofficial returns show GOP candidates the likely winners in two more districts where recounts could be possible. Meeting with reporters Tuesday at the Capitol, Assembly Speaker Robin Vos (R-Rochester) said it’s a big opportunity for them to continue making reforms, “so we are looking at a truly historic chance for Wisconsin to continue moving in the right direction.” Vos said the GOP agenda next session will include improving school accountability, restructuring the Government Accountability Board, and campaign finance reform.

AUDIO: Speaker Robin Vos outlines his agenda for next session (:50)

The Rochester Republican dismissed any talk of revisiting the issue of federal funding to expand Medicaid programs or pursuing right to work legislation. Vos, who previously authored a right to work bill, said “Is it the right time in Wisconsin? Probably not.” Instead, Vos said he would rather focus on “tax reform, regulatory reform, education reform…things that I hope, if Democrats are honest about it, can work together with us and try find a consensus among where we are in Wisconsin.”

Vos says he plans to meet with Senate Republicans and Governor Walker in the coming weeks to help set the agenda for next session.