You are here: Home / News / Walker meets with cabinet to discuss ‘aggressive’ agenda 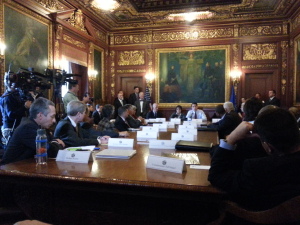 The day after winning his re-election bid, Wisconsin Governor Scott Walker meets with members of what he calls his “all-star” cabinet to discuss a “golden opportunity” to push his agenda with the help of a majority Republican legislature. Walker says he’s “ready to work.”

“We’re gonna be even more aggressive now,” he says, “because I think we’ve got an even stronger ally in the legislature. We’re gonna find a way to work with the speaker, work with the majority leader in the Senate, but also work with individual members.”

The governor directs agency leaders to watch for new innovations, technologies, and ideas that will help get things done quicker, more effectively, and with more accountability.

One of Walker’s priorities, he says, is to have fewer people dependent on government. (Speaker Vos outlines plans for next Assembly session)