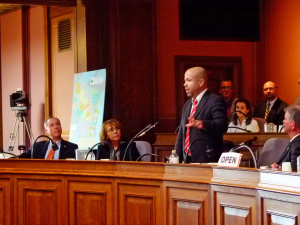 Several members of the Assembly last week touted the level of their conservatism.

Jim Steineke of Kaukauna has been elected as the new majority leader of the 63 members of his chamber — the largest majority since 1957. He says their conservative views on the role of government will help “keep the size and scope of government in check while being fiscally responsible.”

“It should be as limited as possible, providing the services that people need, giving people a hand up when they need it, but not making that a generational dependence on government.”

In lieu of raising taxes to cover state programs, Steineke — the second most powerful man in the state Assembly after Speaker Robin Vos — says they expect to generate revenue through economic growth.

“What we want to do is make sure that every single taxpayer dollar that’s being spent is being spent wisely, because people work hard for their money. We want to make sure if they’re sending it down to Madison that we are not wasting it.” So, he says, “We wanna reduce the tax burden to a level that’s commensurate with that way of thinking.”

Steineke realizes there are basic services government needs to provide — schools, roads, infrastructure. So, there’s a limit to how much they can reduce government spending. The Assembly majority leader-elect says in the coming weeks, he’ll be having conversations with the other side of the political aisle, promoting an open-door policy to hear about their legislative ideas.

First elected to the Assembly in 2010, Steineke says there is definitely room to compromise in the new 102nd Legislature. “Yeah, absolutely. I mean, I don’t know where in our political discourse ‘compromise’ became a dirty word. It’s unfortunate,” he says, “because I think there’s a lot of room for that and I think we did that last session on a lot of different issues.” Though, he admits, they aren’t always the “sexy” issues that make front page news.

Steineke’s counterpart across the aisle, Peter Barca of Kenosha, is re-elected to lead his caucus. In his speech, the minority leader focuses on regaining the majority.

Like Steineke, Senate minority leader-elect Jennifer Shilling of La Crosse also reaches out to the other side of the aisle, saying one party doesn’t have all the answers. “I congratulate our new Republican leadership and I pledge to work with them when we can.” Shilling adds, “The citizens of Wisconsin want their elected officials to work together to be problem solvers for the betterment of our great state.”

Shilling admits the conversation frequently gets “vigorous” on the floor, but says, at the end of the day it’s important for lawmakers to leave their political hats at the door and recognize they are all colleagues.

Senator Scott Fitzgerald of Juneau is re-elected to be that chamber’s majority leader.

Former Representative Bill Kramer of Waukesha was the majority leader before being ousted amid a sexual assault scandal and replaced by Pat Strachota of West Bend, who didn’t seek re-election. Steineke says it’s an honor to be selected by his colleagues to represent them and, he says politicians — regardless of political persuasions — do associate in social settings every once in a while.