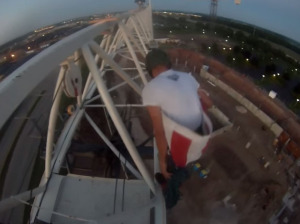 A video showed Nicholas Propson preparing to jump from the crane.

An eastern Wisconsin man will spend 30 days in jail for jumping off a 138 foot tall construction crane with a bungee cord.

The Sheboygan County District Attorney’s office says 26-year-old Nicholas Propson of Maribel was sentenced Monday, after pleading no contest to a misdemeanor of illegal entry to a construction site. Authorities say Propson and others climbed over a seven-foot fence to reach the crane at Acuity Insurance in Sheboygan on the Fourth of July. He then scaled the crane and jumped, posting a video online.

The video showed other people, but Propson refused to tell officers who they were. Investigators were able to identify Benjamin Shibler of Maribel, who faces a December 10th trial for illegal entry to a construction site.

Propson has already paid about $3,400 dollars in restitution because two cranes had to be re-certified to ensure that the incident did not compromise their safety.