You are here: Home / Sports / Wojo era is underway at Marquette 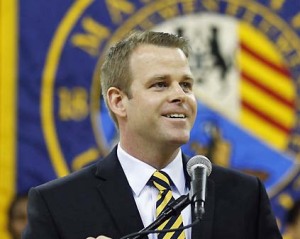 Steve Wojciechowski won his first game as head coach at Marquette on Friday night as the Golden Eagles beat Tennessee-Martin 79-63 at the BMO Harris Bradley Center.

Jajuan Johnson scored a career-high 20 points and Juan Anderson reached his career high with 16 points for the Golden Eagles.

The UW-Milwaukee Panthers led Auburn 32-29 at the half and built a 12-point second half lead, but the Tigers rebounded for a 83-73 victory.

Akeem Springs scored 21 points for the Panthers in defeat.

The win for Auburn, gave Bruce Pearl a win in his Tigers debut, against his former team at UW-Milwaukee.