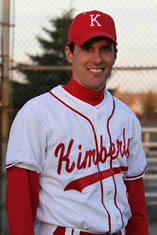 The suicide of Ohio State football player Kosta Karageorge is bringing more attention to the issue of sports concussions. Karageorge, a 22-year-old walk-on football player and wrestler for the Buckeyes, reportedly attributed his emotional distress to concussions he suffered.

Ryan McGinnis, athletic director and baseball coach at Kimberly High School, said the death of Karageorge is troubling. “The bottom line is we have an individual who is dead and who suffered from a lot of concussions, and the chances that there might be a link is pretty high,” McGinnis told WRN Sports Director Bill Scott.

As athletic director, McGinnis said he makes sure parents are provided with the Wisconsin Interscholastic Athletic Association’s current information on concussions. “Most people don’t truly understand, what is it. Is it getting your bell rung, getting knocked in the head hard. It can be, but it also can be a whiplash effect where you never get hit in the head.”

Kimberly high school also offers a baseline concussion test for athletes in most sports, including football, soccer, basketball, baseball and softball. “There are other sports where it’s an option, but we’ve been more aggressive in letting parents know that if they want their son or daughter to take this test, they certainly can.”

McGinnis is also the father of four young children, including a daughter who plays soccer. He said he and his wife have instructed her not to do headers, and are preparing to handle the decision-making process when it comes their children’s’ athletic careers moving forward.

“My wife and I both have athletic backgrounds. We’re competitive and intense, and sometimes even the best perspective might be skewed when you get into the realm of competition, and that’s sad reality of sports,” McGinnis said. McGinnis said the threat of concussions is something they will consider if his son, who currently plays flag football, wants to continue with the sport. He said the latest findings on concussions related to the sport are concerning. Would he hold his son out, based on those concerns? “Potentially,” he said. “Now that’s a dangerous thing to say as an athletic director. I’m a huge proponent of football. I think it’s a lot safer than it was ten years ago, because of the knowledge.”