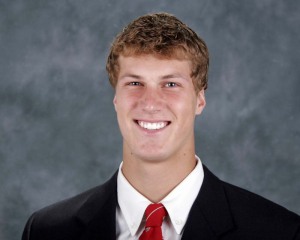 In 2012, Wisconsin crushed Nebraska to win the Big Ten Championship by 39 points.  Last night, the Badgers, who were 4-point favorites going in, were crushed by Ohio State 59-0.

Wisconsin (10-3) lost in the Big Ten Title game for the first time in three trips.  The 59-point beat down matched UW’s worst loss to the Buckeyes after falling 59-0 in Columbus back in 1979.

The Badgers did win the pregame coin toss, but deferred to the second half.  So Ohio State took the football and marched right down the field to score a touchdown, a Cardale Jones 39-yard pass to Devin Smith to give the Buckeyes the only score they would need to win the game.

The Badgers top ranked Big Ten defense had no answer for the Buckeyes, much like the Wisconsin offense had nothing to offer against the Buckeye defense.

The Buckeyes scored on four of their first five possessions and shredded the Badger defense.  Ohio State finished the first half with 364 yards of offense.

The Badgers finished the game with 258 yards of total offense and only 71 yards rushing.  Melvin Gordon was held to 76 yards on 26 carries and quarterback Joel Stave was picked off three times.

It’s impossible to blame this loss on any one area because the whole team struggled.  But to complete against elite teams down the road, Wisconsin has to improve its quarterback play.

While Ohio State was taking away the run, the Badgers needed Joel Stave to step up and make some plays in the passing game.  He was all over the place.  Stave had shown some signs of some late season improvement, but against a top team like Ohio State, his game faltered.

The Badgers will find out their bowl destination Sunday.  They’re most likely to land a spot in the Outback Bowl (Jan. 1), the Citrus Bowl (Jan. 1) or the Holiday Bowl (Dec. 27).