You are here: Home / Badgers / Badgers suffer first loss of the season 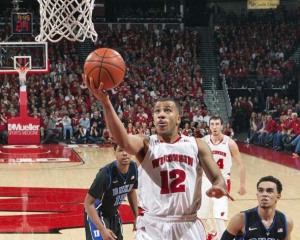 4th-ranked Duke marched into Madison and knocked off the 2nd-ranked Wisconsin Badgers 80-70 at the Kohl Center in the ACC/Big Ten Challenge on Wednesday night.

Wisconsin entered the game holding teams to 28.8% from three-point range and 37.1% overall, but Duke blew those numbers out of the water.  The Blue Devils shot 60% in the first half and 65% for the game.  They also hit 7 of 12 (58%) from three-point range.  The 65% shooting is a Kohl Center record.  The Blue Devils also shot 71% in from the field in the second half, also a Kohl Center record.

Freshman Tyus Jones had 22 points, six rebounds and four assists for the Blue Devils.  Fellow freshman Jahlil Okafor added 13 points on 6 of 8 shooting from the field, to go along with six rebounds.

The Badgers return to the court on Saturday when they travel to Milwaukee to face Marquette.

Big Ten teams captured two games on the final day of the challenge and that was enough for the Big Ten to win the 16th annual challenge by an 8-6 margin.